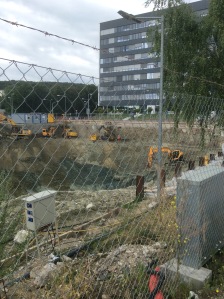 They take the train to Košice. It’s a Slovak joke and I suppose you have to be Slovak to get it. Bratislava is extremely busy during the week, they are building huge new buildings everywhere, for example, but during the weekend it looks like a city in the aftermath of an attack with a neutron bomb.

Though who would ever throw a neutron bomb on Slovakia? The Hungarians perhaps, but they don’t have any nuclear weapons. They are taking over the south west of the country almost in the style of Israeli colonists in Palestine. No, that’s not true. Nothing can compare to the sheer brutality of Israeli colonists.

Anyway, when in Bratislava do as the Bratislavčania do. We are the road to Banska Bystrica, an old mining city that is supposed to be the official center of Europe, geographically speaking. My source for this claim is called Zuzana Pištova, and so far no other reliable source has substantiated it. 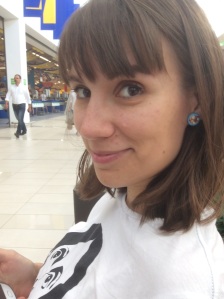 Zuzi’s grandmother turns 80, which always seems more of a feat than in spoiled little Belgium, here the average pensioner gets around 400 euro a month. And prices may be lower in a Slovak village, they are really not that much lower.

Almost every Slovak I meet doesn’t seem to like cities. Our Slovak landlord happens to be in Belgium and already let us know that he misses the mountains. Slovaks love their mountains and often go hiking. This could explain why so many Slovak have shapely killer legs and have incredible waists.

Aside from any potential beneficial effect on the shape of women’s legs I am not a big fan of mountains, being a book devouring hermit. The views are breathtaking, objectively speaking, but I have no taste for them. There’s a short story by Edgar Allan Poe in which he says melancholic people can’t stand to look at broad landscapes. I agree.

In stark contrast with the low salaries is the comfort that a regiojet bus offers. The fares are fairly cheap and the service is excellent. Every passenger has his or her own television screen with lots of movies and series you can watch. Zuzi is watching Friends. They bring you free newspapers. Today we were unlucky, they didn’t have our favorite Slovak newspaper DennikN. A small independent newspaper that broke away from the mainstream, corporate owned, newspaper SME, so we had to settle for Hospodarske Noviny. A quality newspaper, yet since its sad uninformed piece on (ex) presidential candidate Bernie Sanders I don’t like it anymore. They also bring you free coffee and tea. For short distances they are great. If you spend more than six hours on one of these busses though you’ll want to amputate your legs, because the leg room was allocated in a medieval torture chamber.

If you ever visit Slovakia, do not just go sightseeing in Bratislava, go east, to the villages, that’s the real Slovakia I am told. Bratislava is just a place where young Slovaks go to ‘makat’ (work your ass off) for peniaze or korunky (money). Personally I like Bratislava, especially during the weekend when I have the town practically to my self and I can read lying prostrate in the middle of the road. Or at least near the lake that’s 200 meter from our doorstep, and is not radioactive, contrary to popular belief. Yes, the Chernobyl cloud probably lingered here a bit, but Slovak milk is white, not green, local cheese can’t kill you or I’s already be dead. The effects of radiation might explain the striking prevalence of totally hot woman syndrome around here. A syndrome that bothers nobody and the afflicted are not looking to be cured.