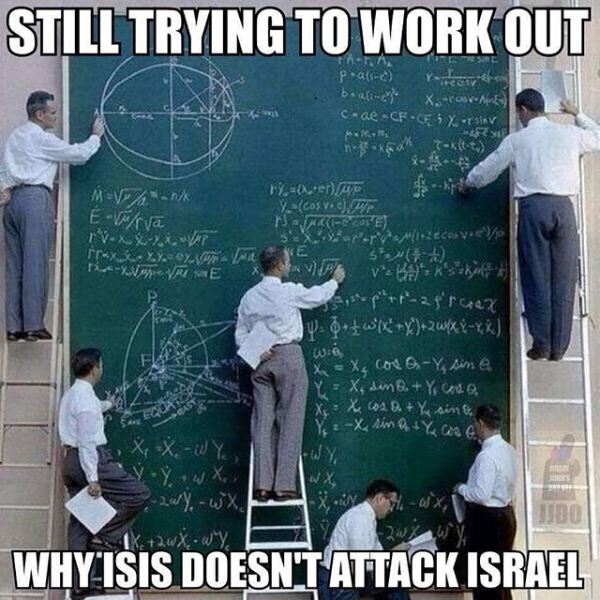 @project_authenticity Don’t make conspiracy theories about Israel, if you were an actual intellectual you would know that this is beyond false and that the very people you make fun of you act like by making such absurd and hate-full claims.

@solomon_shapiro yeah, well, the IOF is made up of a bunch of baby killers and cowards. There is no excuse for the systematic kidnapping of children. And ISIS is definitely a good thing for Israel. They have most definitely treated wounded ISIS fighters. They bomb the people in Syria who are actually fighting against ISIS. You should know better than to comment on something you disagree with. No good ever comes out of a discussion on social media. Wire some money to the IOF to continue their brutality or go to hebron and harass some Palestinians if you really feel you need to do that, but don’t comment here. Show some chutzpa and don’t be a schmuck. Shaloom.

@solomon_shapiro real intellectuals like gideon levy, norman finkelstein, noam chomsky, illan pape and so many others criticize Israel and its Einsatzgruppen all the time 🙂 I ve lived in Palestine, I ve heard the sound bombs the IOF sets off just to scare the hell out of people, I ve visited hospitals in hebron, ramallah, nablus, bethlehem and heard the stories of the doctors, etc. Nothing you say is going to convince me of any good will on the part of the IOF. Also a fact: whenever somebody defends Israel in any way it s possible he or she is being paid to do so. Sadly Israel has committed so many crimes filmed by people in Palestine that the hazbara is having a loooot of trouble to show Israel in a positive light.
@project_authenticity your right in that we should not argue but Israel dresses anyones wounds as we are a peaceful nation, and we only defend our selves I’m sorry that Palestinians put women and children in their missile facilities just so they can blame Israel in the media when we defend our selves, and everything else you said is blatantly false. So ill stop arguing but I ask you to please research what is going on without reading propaganda news. Also over 4000 Israelis have been killed by terror attacks alone in the last 10 years. And Israel is a land of all peoples that belonged to the jews 4000 years ago when we invented the first ever religion. Its not my fault that your peoples stole are land and lay claim to something that was never theirs.
@project_authenticity this is all because you use your people as human shield’s.
@solomon_shapiro we agree that this is pointless. Israel kills children who are nowhere near any place where token Palestinian resistance cobbles together amateurish rockets that can’t even reach Israeli cities in any effective way. Children are being kidnapped and held captive on trumped up charges. Torture is the rule not the exception. Am not Palestinian myself, by the way. The people who lost their land in the Israeli push for Lebensraum in 1948 had not stolen anything. It had been their land for generations. This conflict will never be solved. At the moment the Palestinians are – for the most part – the good guys. Israel shoots nurses and journalists and people praying at the apartheid fence. Those are peaceful protesters. Every day jewish settlers destroy some olive trees, intimidate palestinian children on their way to school, humiliate people at check points, have drivers get out of their own cars stand in the broiling sun as punishment for the silliest reasons. Saw it with my own eyes. Nothing you say will undo that. I have an incredible respect for jewish people who are willing to criticize the actions of Israel and am surrounded by the products of jewish culture. Am reading ‘is this a man?’ by Primo Levi. My favorite psychologist is Gabor Mate, born a hungarian jew. Right this minute am watching Yuval Harari talk on youtube. The list is long of things I admire about the jewish people, BUT what Israel does is pure evil.
@project_authenticity not only is this all false but its the opisite and the only reason we have a wall and check points is because other wise your people bomb and kill us.
@solomon_shapiro again, am not Palestinian. Palestinians have a right to defend themselves. Unfortunately they don’t have massive military support from the US, so they turned to terrorism. Am not sure if that was the best choice, but they had a right to do that, as a reaction to what Israel does to them. If you say it’s false that Israel deliberately shot innocents during peaceful protests, then you are being very dishonest. I doubt very much you are not aware of this. You’re starting to sound like some nutcase who denies the Holocaust took place in the face overwhelming evidence. I can do this all day and night by the way. Not sure how much energy you want to waste here.

Solomon Shapiro claims 4,000 Israelis have been killed by Palestinians in the last ten years. That is completely false information as even Israel’s ministry of foreign affairs points out. In the war for Palestinian freedom 1,357 Israeli people have been killed by Palestinian since September 2000. It’s always a massive loss when someone is killed, but facts are facts, claiming 4,000 have died in the last years is just a lie. You can check it here.

In the picture: Razan al-Najjar, known to the world as the 21-year-old Palestinian medical nurse shot dead by an Israeli sniper in June 2018.