Let’s look at all candidates. In the order the mainstream media never would.

This guy would actually beat Trump. He talks a lot about technology. He has a lot of so called ‘cross over’ support. Republicans like technology. As a topic advances in technology are politically ‘neutral’, everyone is for them. He is also not a career politician. He sounds smart, he doesn’t talk like a politician and he comes across as very spontaneous. One thing that appeals so much to Trump fans is that Trump doesn’t sound like he rehearses every single sentence he says 29 times in front of a mirror. That’s Hillary Clinton’s style. Trump is too lazy for that. And it makes him a lot more likeable in the eyes of the uneducated than somebody like Hillary who only reminds them of how uneducated they are. (am not a fan of Hillary at all by the way).

Yang does really well when he appears on talk shows.

He’s an entrepreneur, which is the closest thing you can get to being a God in the US.

In the US being a politician is not seen as actual work by many people.

He has everything going for him. He’s not too young, not too old, he comes across as very genuine, he’s funny, he has a very active and tech-savvy fan base, he’s popular among young people.

The way he stood up against MSNBC for not taking him seriously was impressive. It’s not what you would expect from someone so new to politics.

This dude is only going to get stronger at playing the game as the race continues.

Cool fact: he wants to decriminalize drugs. Am for that cause the war on drugs is not a war on the drug cartels it’s a war on the most traumatized and vulnerable people in our society. See the work of Canadian psychiatrist Gabor Maté for more info on this.

Warning: potentially sexist remark follows. Jesus, she’s attractive. Her natural Hawaiian good looks combined with her sharp intellect, deep voice, and ironclad self-confidence and taste in clothing make her arguably the most beautiful candidate to ever run for president of the United States.

In an earlier post I have mentioned that her good looks are probably working against her.

She says very sensible things about the USA’s horrendous record of meddling in other countries’ affair. When it comes to foreign policy she kinda sounds like Ron Paul, a guy who tried to become the nominee of the Republican Party some years ago.

Her veteran status – active duty in Iraq, she’s a major – gives her lots of brownie points in the eyes of Republicans. Macho Republican men will probably like her because of her looks. It’s probably women she scares off.

A real negative point is that lots of people associate her with nothing more than her talk against ‘regime change wars’.

That’s a pity. And partly her own fault as she seems to focus primarily on profiling herself as a tough veteran who is against war. Tbis is also because she doesn’t get much time on TV, so she needs something catchy.

The best way to get to know this candidate is to watch her interview with Joe Rogan where she actually gets time to talk about something else.

This year’s Hillary Clinton. The same awkward rehearsed poses and lines. But with only 0,01 percent of the already very low level of charisma Hillary Clinton could come up with. So in short, a self-serving, over ambitious, entitled, attention seeking bitch who in the end does not give a shit about people. See her actions in California. Tulsi Gabbard called her out and destroyed her.

Signature tactic: have a silly, arrogant and perpetual smirk whenever any other candidate speaks. Or whenever she is being criticized. As if to say: I know everything better and that is such an obvious fact I don’t even need to say anything.

She just becomes less likeable the more she appears on television.

The Democratic Party establishment would love to see her as the nominee, but they don’t know how to sell her to a public that is more and more aware that the whole show is rigged. Last time they cheated Bernie out of getting the nomination. And they were not very subtle about it.

She dropped out while I was writing this article. By the way, here’s some proof of how bad the corporate media is at selling you their favorite candidates.

These rankings were published in January 2019. 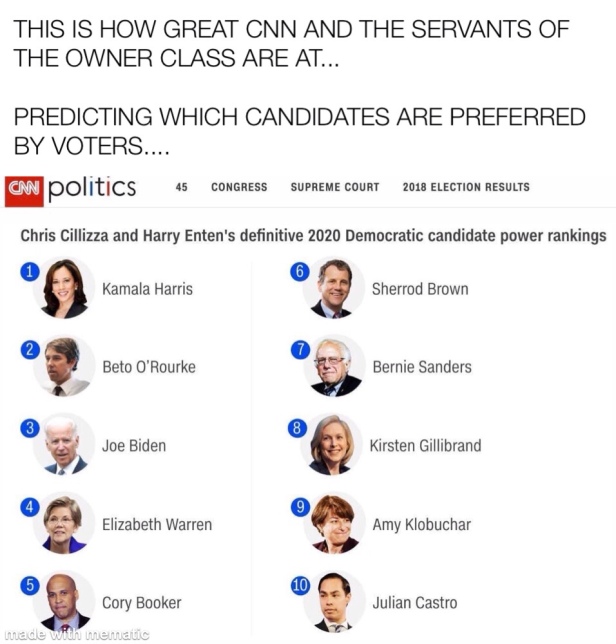 Even her hair is saying ‘no’ to everything. Including to her own chances of winning.

Signature tactic: Saying there is no money to have any kind of improvement in the lives of Americans. But vote for me.

I honestly can’t remember anything this guy has said that would make him appealing to vote for. He became the mayor in what he likes to suggest is a redneck town. So he means to say he can convince Trump voters. Meaning that he is a centrist candidate who is making the classic Democratic mistake: we need to sound as unoriginal and ‘safe’ as possible so Republicans will vote for us. It’s the best strategy since the Germans said: ‘To defeat Churchill we need to attack Stalin first’. Good luck with that, buddy.

Signature move: Trying to look and sound like the guy you wish your daughter would come home with one day.

Kinda weird cause he’s gay. Which would be the only cool thing about this talking suit becoming the nominee.

Handsome. Big eyes. Wants to legalize marihuana. Say some other things as well. Seems likeable. Sounds like a good guy. It’s like he’s Obama’s giddy younger Obama. Like woooooow I get to get up here on stage and do what my older brother did. Doesn’t have the intensely trained oratory capacity that Obama has though.

Is unable to raise the kind money that Bernie, Yang or Tulsi can raise. Not sure if he can stay in the race.

Would maintain the status quo if elected president.

The legalisation of marihuana will continue without him.

Signature tactic: Trying very hard to be funny and energetic.

Sometimes it’s like Steve Urkel went into politics. Do you remember Steve Urkel? Got any cheese? Booker’s version of that: Got any sympathy for Obama left?

This is the light version of Bernie Sanders. She is here to give you the illusion she will do what Bernie would do, but in a more sensible home economics kinda way. She’s a ‘radical’ – that’s a title easily earned in the US – in front of the camera but then she goes off hobnobbing with the rich people running the country and taking their money. She used to be a Republican. Now she is here to pretend she is a safer version of Bernie Sanders, a guy who has been fighting for the same values and policies his entire life.

Signature tactic: I am your sweet grandma who would go after anyone trying to bully you with her broomstick or soup ladle.

Even with her weak voice and subdued body language she has more charisma than Kamala Harris or Amy Klobouchar of Steve Buttigieg, but so has a dead dog. Like if it’s a German dead dog. Vote for her if you like to hear hollow phrases about how we’re one big happy family while nothing will change.

The Democratic party’s malfunctioning weapon. He’s showing signs of Alzheimer. He inspires nobody.

Who cares? Andrew Johnson was Abraham Lincoln’s Vice President and Andrew Johnson was one of the worst presidents the US has ever had. And that dude was VP to a brilliant statesman, Biden was VP to nothing but a slick corporate tool whose cabinet was picked by the bankers.

I don’t even think Biden wants to be the president. When voters ask him questions he is quick to say they should vote for someone else.

Maybe it’s not Alzheimer’s that makes him say things like ‘poor kids are just as bright and talented as white kids.’

He just doesn’t want the job.

God, that moment he fat shamed a guy in the audience at one of his events… 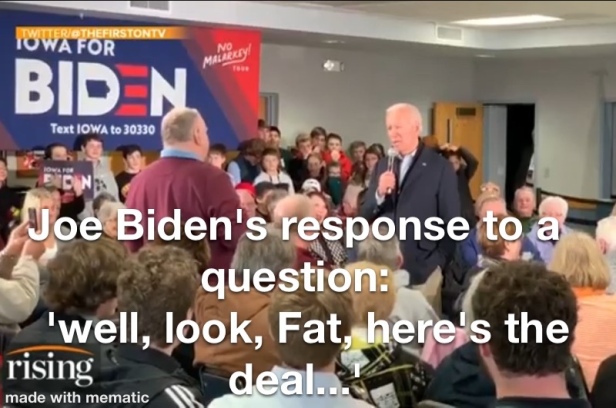 Billionaire who entered the race to stop Bernie Sanders. Only reason he’s running.

Signature tactic: spending millions of his own money on buying advertisements and avoiding the debates.

Oh, at a certain point he basically said poor people need to be taxed otherwise they just spend their money on unhealthy stuff. Yes, really… That’s the kind of surreal reality this dude lives in. Really somebody the masses can relate to. 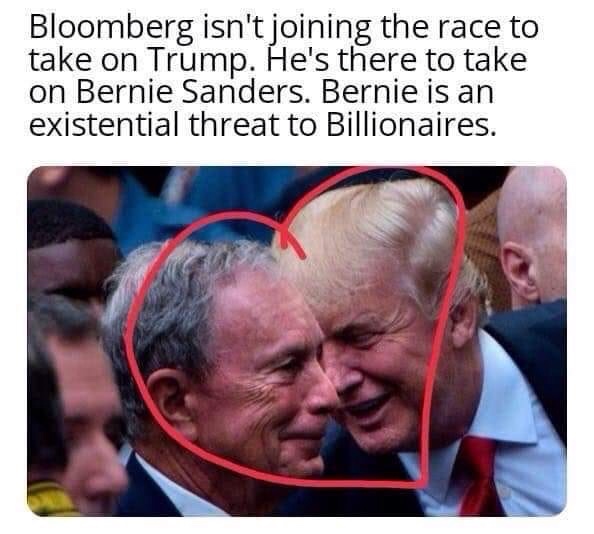 Wants to give the US all the systems that work well in Europe.

The owner class in the US want you to believe he is a ‘radical’.

He’s just a European centrist. There’s nothing radical about him.

He genuinely cares about the well-being of everyone.

He’s the only one to openly criticize for what Israel is doing to the Palestinians.

Unlike some other candidates he’s been defending the same ideas his entire life.

When he says ‘not me, us’, he really means that.

Am not hiding it, he’s my favorite candidate.

He doesn’t take money from corporations. Donations to his campaign average 27 dollars.

He hasn’t been corrupted.

I love the dude.

Crucial to realize: His campaign is facing a very real media blackout. He does not get the coverage his popularity and reputation deserve. Even so he has a huge supporter base. Another sign of how good this guy is.

If the Democratic party wanted to support him, he would be the nominee, no contest.

The Democratic establishment will fight tooth and nail to prevent this.

They will try to get Biden nominated.

I hope they fail. Bernie, and possibly Yang or Tulsi, are the only ones that can beat Trump. They are the only candidates that are putting meat on the table. 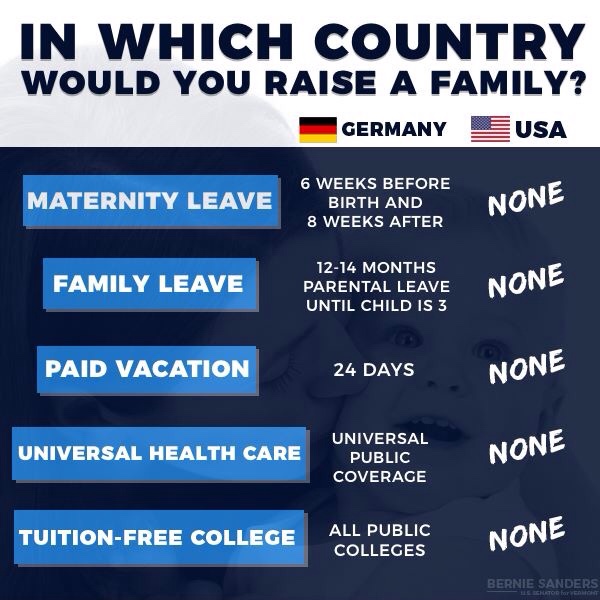