My 5 awesome things for today:

1. I believe creating an environment in which my students will WANT to speak English, helps to improve their English

No, I don’t have orthodox lessons.

I may very well be very wrong, but I could not teach in any other way and still be me. And for my kind of salary am not about to sell myself out.

Most of my guys are not afraid to speak English and almost always speak English to me, even though by now they know I understand Slovak.

4 guys who are not my students asked to be in my class today.

I do believe in the long run it makes a tiny bit of a positive difference if we laugh from time to time and do not take everything dead serious.

What I take dead serious, is that my guys are immersed in English three hours a week and take risks speaking up.

Am also always available to them online, during breaks and during the lessons I focus 100 percent on them and on English.

And yes, I am not that good at certain aspects of my job, but I do try to change that.

2. There’s nothing smart about following the news

You don’t need newspapers to understand what’s going on in the world.

If you enjoy it fine, but it won’t make you smart and it hardly ever enable value for other people unless you are a journalist yourself. It certainly never got me anywhere and I grew up in a household that bought three different newspapers a day, one of them so called ‘high brow’.

If you want to understand politics: follow the money.

And mainstream news is crap, because it will have you believe that Obama was a good president, because he looked like a cool black guy. The guy has bombed the shit out of bunch of countries. In 2016 he dropped 3 bombs per hour on other countries. But the media will broadcast his touching charismatic – wipe a tear – speeches and say very little about any bomb dropping.

3. Am experimenting with visualisations techniques to get groups of people in an entirely different, hopefully more relaxed, more motivated state

I’ve only just started doing it, but so far I’ve noticed you can hear a pin drop when you let people visualize things that could trigger the best in them.

I’m being vague here, but it’s too soon to say more, have to experiment a bit more.

4. A friend thought some parts of my ‘get the right guy’ workshop for women was worth ‘borrowing’

I guess I should be flattered, even though I have yet to launch the workshop myself…

5. Your one word arrived in the mail today

I’ve had it with self-help books that promise you heaven on earth if you just go and mediate and visualize all your staggeringly beautiful outcomes, but this is a book I’ve looked forward to for months.

I hate the fact that he dubs a beep sound over the word ‘fuck’ or ‘fucking’. I don’t fucking care about swear words. I do find beep sounds fucking irritating.

I do believe his book will be fucking inspiring, as is most of his content on his YouTube channel. 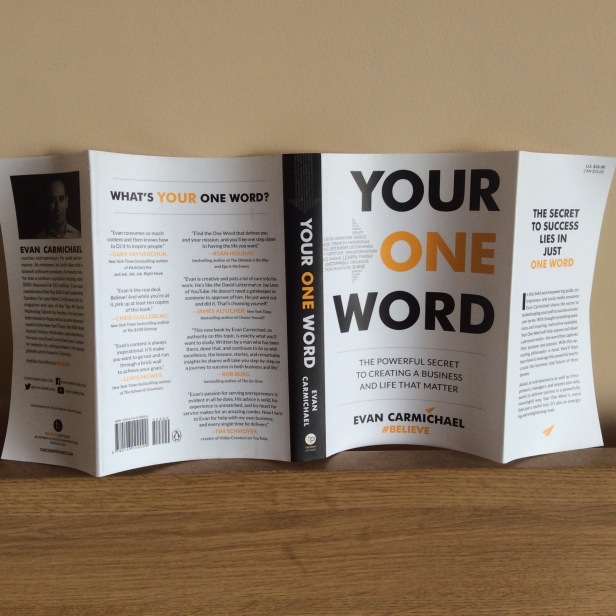