1.The insanity that is a job ‘Just Over Broke’ 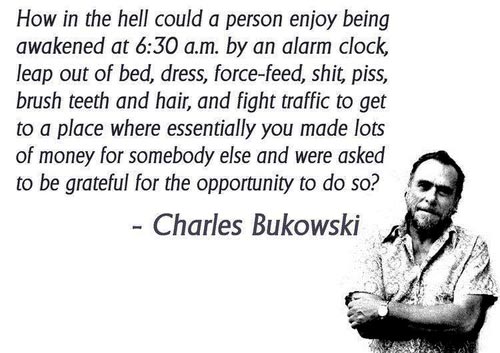 When it comes to money most people think about selling their time for cash. That’s also what we are taught in school. Do this and do that and then, if you pass enough tests, someone will hire you to perform certain tasks 40 hours a week and you get money. They usually don’t even mention that it would be nice to see some value in what we do during those 40 hours. Our school system is very paycheck oriented. I can’t tell you how many times my own grandfather told me to ‘just care about your salary’.

We rarely question who exactly it is that hires us to perform those tasks. We are we not taught to start stuff that allow us to hire the people who’ll do the tasks for us?

We are rarely encouraged to believe in our dreams, certainly not if that dream leaves the borders of the ordinary.

Why not think about which product you can sell or which service you can offer that disconnects the time you have available from your income? So few people have this reflex.

I don’t agree 100 percent with the Bukowski quote pictured below. I know people who love their jobs or their jobs (if they’re Slovak, they have jobs, plural), I think there’s work to be had that’s important and that has a positive impact on society and who we are as human beings, I also think that work that fits us keeps us sane, but at the same time I see a lot of zombified people who fit the description in the quote to a horrifying degree… I wish we could eliminate all the soul wrecking jobs and replace them with pursuits that let people make a life for themselves and others and not just a living.

Am certainly not there yet, but I can concentrate better when:

In Sweden they are thinking about the potential benefits of having sex breaks at work.

Check it out for yourself, here.

3. The crisis of men

I was talking to my therapist today and she knodded very affirmatively when I said that there’s a crisis going on among our men folk.

She kept asking what I needed as a man, and I honestly didn’t know what to tell her.

When I talk to women their boyfriends and husbands don’t seem to know what they want, they play video games, go out drinking beer with their peers (have you ever noticed how few friendships there are between older men and younger guys? That’s a pity, I think this could be very beneficial for both parties), get obsessed about some, ultimately rather pointless, hobby like cycling, hiking or snooker or collecting something like lemonade glasses or brands of whiskey. Is that it? Is this what we want for our men? I meet quite a bit of boys and men who on a communicative level are somewhere between a cactus and a clever, but depressed dog… I know, I was that kind of teenager…

Women often state that the men they know don’t listen, don’t give them real attention, have the obnoxious habit of bragging about all their accomplishments and intentions -mostly the latter-.

This is one of the reasons why I’m interested in things like The natural lifestyles. I mean, how far have we let our masculinity disintegrate if we need overpriced ‘boot camps’ to teach men how to get a date with a woman? Why don’t we men know these things? Why did I personally have to read any dating book I could lay my hands on to finally be sort of ok around women I find attractive?

On a side note, when I’m VERY attractive to a woman, the attraction takes over so entirely that my nervousness takes a back seat and instead of nervous I become over eager. That as a side note.

‘Why are you so fascinated by this crisis?’, asks my therapist. ‘Why do you want to understand this?’

Good questions, but so far I haven’t found the answers.

When you walk the streets of a western society, there’s very little or not flirtatious behavior going on. At best you see people throwing lingering glances at each other. That’s it. There really is no sexy, sultry, steamy vibe going on in our western society. At the same time tons of omnipresent commercial message have a clear and/or screaming sexual message. I mean, on the way home I always pass a coffee house that has the picture of a woman on one of its outer walls that looks like the cup of coffee she’s holding is doing some major advanced moves to her pussy. It’s just coffee! Why the sexual vibe? And why do the people in that coffee bar give off anything but a sexual vibe? Why that gaping contrast?

At the same time we all act shocked when the topic of sex comes up. We would be catapulted out of our wits or assume we are the center of a lame prank if someone would walk up to us in the street tomorrow and casually, but seriously ask us if we would like to have sex with them.

So sex is everywhere, but we struggle to communicate our sexual intentions. I mean, take a good look at his video about learning how to project sexual intent.

What I appreciate about interacting with women by the way, is that women are like a mirror, if you are not ok with yourself, any issue you haven’t dealt with yet, you will see that reflected in them, in their eyes, in the way that respond to you.

So according to my therapist one of the reason I it’s like to be around women might be that the women help me connect to my emotions.

So no, it’s not so much sex we want from women. Though we do want that too. It’s something else, in a way we need them to evolve into the person we want to be, but can’t ‘locate’ without them.

On a boyish, childish level we also collect ‘notches’ to feed our ego, we want to up the number of women we’ve slept with. It’s incredibly silly behavior, I know. I mean, when men pursue sex solely for this reason.

And yes, I think everyone would have a lot more fun if men got could at approaching women that they like. Look at this quote and try to disagree with it.

5. A shortcut to happiness and a positive mentality :: the ‘Never better’ trick

I forget where exactly I’ve picked this up, but in short, it goes like this:

Whenever someone asks you how you are doing, respond with: ‘Never better’.

People are so surprised when you do this!

And damn, it gives you such a life affirming, positive surge of energy in your body, whenever you enthusiastically say: ‘Never better!’

I’ve been doing this for a while now, and I can truly say it has worked small wonders for my mood.

The reactions of people have also been revealing. I think you can guess how most people react to this 🙂