1. The north was so strong, the south didn’t have a chance 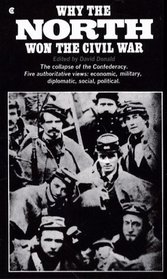 I am not bying that one. History offers way too many examples of underdogs coming out on top. Check out Malcolm Gladwell’s latest book on the success of underdogs. Available on amazon. The north had massive advantages, but experts at the time were convinced that they needed even more to conquer such a vast country as the Confederacy. The South was succesful at building a formidable striking force of itself and then badly mishandled that striking force, whereas the North eventually learned to put its own striking power to excellent use. No, really, you can’t convince me that the Confederacy never had a chance to win, they gave the North too much trouble, but then shot themselves in the foot by several stupendous decisions.

2. The South’s generals were strategic faillures

In the book they say they relied too heavily on Jomini. I don’t care where they got their ideas, the facts are that they relied heavily on the tactical offensive (weird, because they were the defenders) and lost an inordinate amount of troops. Their best chance was to concentrate their armies and force Union forces to concentrate as well, making it impossible for the North to attack at many different points. The Southern forces spread thin, tried to defend every point and failed. Even when Lee invaded Pennsylvania in 1863 Jefferson Davis didn’t give him all the troops he could have given him. He also ignored Lee’s repeated suggestions to send up PGT Beauregard to threaten Washington with a makeshift force. Lee himself then blundered by going on the tactical offense against a superior opponent.

True, but contrary to the explanation in the book, this wasn’t something that couldn’t be changed. If the South hadn’t squandered its opportunities in the first half of the war, they would have been more forthcoming. I found this essay to be the least convincing, along with the first one.

4. The Confederacy was… too democratic

Well, perhaps if you were white, there certainly wasn’t any democracy for ‘people of color’ in the south. Anyway, I’m sure the stubborn the loose military discipline of the southern soldiers and the crazy policy that let them elect their own officers was a negative factor, but I don’t think this was the most decisive factor. This one is just one bad policy in a long string of bad decisions.

5. If they swap presidents the Confederacy wins

I agree. Lincoln was a far, far better president than Jefferson Davis. Jefferson Davis faced a daunting task, but so did Lincoln. Lincoln simply didn’t make the mistakes that Davis kept making throughout the entire war. He micromanaged armies and government work, he communicated badly, couldn’t admit mistakes, didn’t evolve in his strategic thinking, never had a clear overall plan on how to win the war, didn’t do what needed to be done in order to win, didn’t look for the jugular in his opponent (Lincoln did), seemed more bent on proving that the cause of the South was a just one, as if that in itself would magically bring on victory, departementalized the entire confederacy into so many different departments that armies couldn’t move where strategic necessity dictated they should move, didn’t listen to public opinion (look at how long he kept Bragg in charge, Lincoln would never have done that), he didn’t make strong political friends and never tried to got rid of his political opponents (his vice-president, the almost seditious governor of Georgia, etc. Just look at how Lincoln reinforced those who could help him and checkmated those who were working against him. Or how he treated his generals.)

Personally I think the Confederacy lost because:

-extremely good decisions by the Confederate political and military high command were needed to be made to counter the economic and numerical advantages of the North. The South didn’t make enough excellent decisions, and made several self-destructive ones, such as never really using the slave labor for the war effort, destroying its own economy, failing to find a strategic plan that had a chance of succeeding, the Confederacy alienated its population, squandered its impressive military force (the Confederacy did pull of this one amazing feat: it built the second largest modern army in the world at the time, but didn’t use it correctly) and had too many people supporting the Union or who were ambivalent about the fate of the Confederacy within its borders.