This movie depicts events that happened 157 years ago. Precisely on this day, the 18th of July.

The movie is from 1989. Civil War historian Gary Gallagher has named it as his favorite Civil War movie. Am not surprised. The acting is first rate. 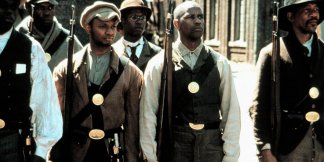 It gives an accurate idea of the racism black Americans experienced on both sides of the front lines. It exposes corruption, prejudice, racism, fragile friendships, etc. It teaches a lot of history. You see some excellent examples of Civil War era clashes on the company and regimental level.q You learn that blacks had to be commanded by white officers. Those white officers could be executed if captured by Confederates. The north underpaid its black soldiers. It regarded them unfit for combat, just because they were black.

There is more than just the history though. The strained relationships between all the main characters teach you a lot about how the human soul operates.

How important is this movie to me?

When the Belgian television aired it a few years after its releases to theatres in 1989 I taped it. I still have the VHS cassette back in Belgium.

One tiny point of criticism though: I agree with famous film critic Roger Ebert. He have the movie 3,5 stars out of 4, but regretted that so much of the movie focusses on the observations and experiences of their white colonel.

The black actors are so good they steal the show anyway.