“Hatred as an element of struggle; unbending hatred for the enemy, which pushes a human being beyond his natural limitations, making him into an effective, violent, selective, and cold-blooded killing machine. This is what our soldiers must become …”

Che quoted in this article from Slate.

“..the true revolutionary is guided by strong feelings of love”.

Che quoted in this article from Aljazeera.

The Slate article, as you have guessed, puts the guy in negative light, the article from Aljazeera puts him in a positive light.

I’ve just had a rather lively discussion with a very good friend of mine about this iconic, yet controversial figure, so am a bit weary to say much more.

Googling him, you see people call him ‘Jesus with a gun’, ‘a genius’, but others claim he was a ‘butcher’, I also see a recurring claim that he shot a pregnant woman through the stomach because her family didn’t agree with him.

Weirder claims are readily found such as that he stank, and only changed his clothes once a week, and that he enjoyed killing dogs.

The most ridiculous claim comes from conservipedia.com where they seem to misinterpret the aforementioned Slate article and seem to suggest that he locked up aids patients. Aids didn’t exist while Che was alive, so that’s certainly not true.

What seems to be a fact -ever notice that since the rise of the internet we really have to doubt everything and everyone all the time?- is that he was willing to use nuclear weapons. Millions were allowed to die as long as it brought on the socialist revolution.

His haters criticize him for such statements, but his defenders will of course just say that under capitalism millions die every year anyway, just because of poverty.

My friend was rather willing to ignore that Che had blood on his hands. When I asked him if he saw this as a case of: ‘you can’t bake an omelette without breaking eggs’, he agreed.

The age old question pops up: do the aims justify the means?

Odd thing by the way: Che predicted that the Soviet-Union would eventually see the return of capitalism. You can hardly call him a total idiot, but was he hero?

According to his captors he pleaded for his life, saying he was worth more to them alive.

Clearly he posed enough of a threat to certain interests to summarily put him to death.

What’s certain is that he continues to inspire young idealists. I took this blurry picture on the streets of Brussels a couple years ago. Young Belgians are waving a flag with Che’s portrait. The youth organisation of these young communist has Che as its icon. Perhaps not the best choice for an organisation that claims to be peaceful. 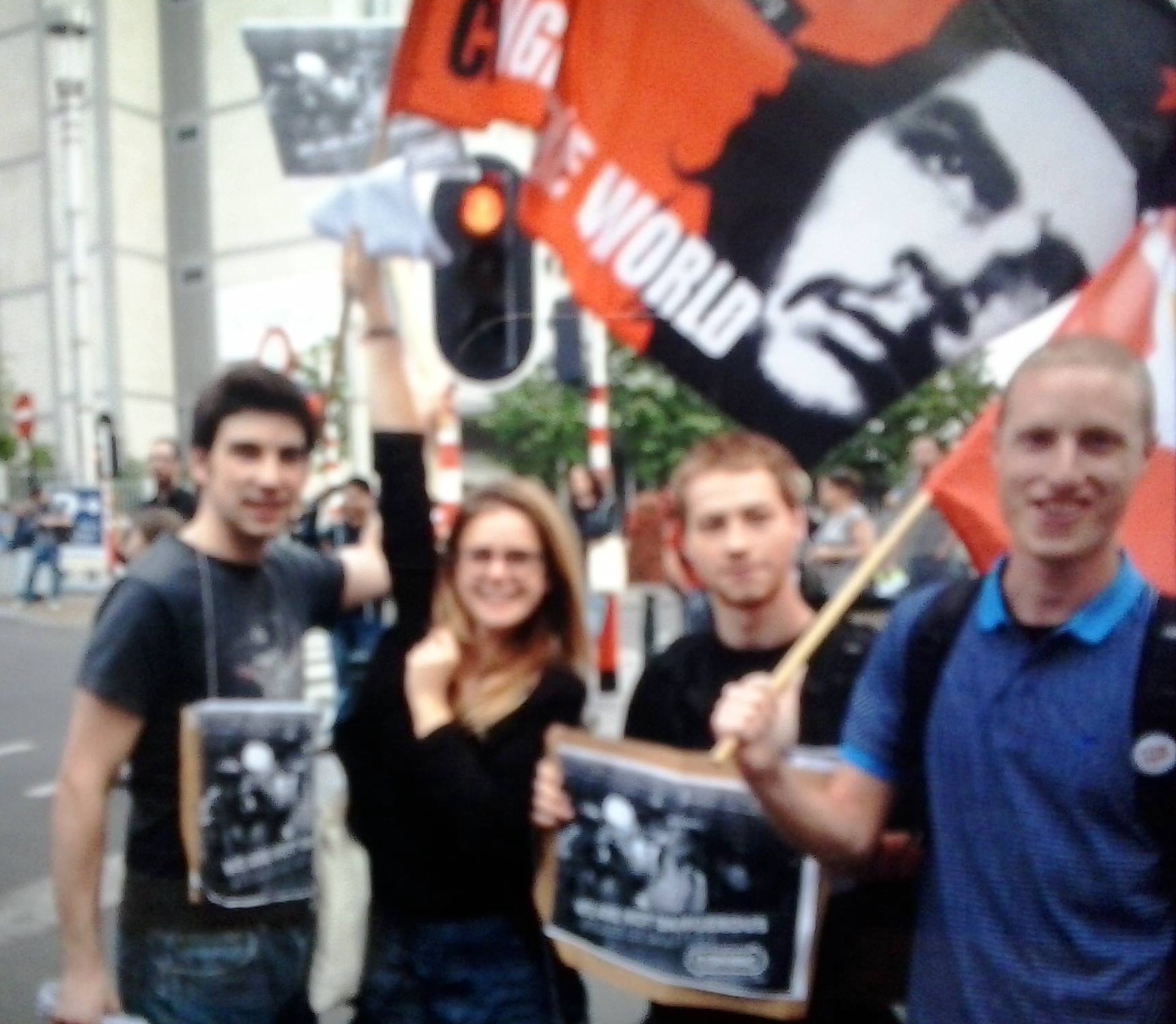 Still, one of his biographers, Jon Lee Anderson says:

“I have yet to find a single credible source pointing to a case where Che executed an innocent. Those persons executed by Guevara or on his orders were condemned for the usual crimes punishable by death at times of war or in its aftermath: desertion, treason or crimes such as rape, torture or murder’.

You can read that here.

Having spent quite some time going over articles pro and against the man, it seems he had more positive intentions, than evil intentions, if his omelette was worth breaking the eggs, we don’t know. My friend thinks it was. In Cuba everyone has good and free medical care, according to him, he’s seen this with his own eyes and he says he sees Che as a hero and a genius.

I remain unconvinced and in the end we just agree that we don’t want to see anyone go hungry or be stuck without medical care.

As the Aljazeera article mentioned, this was Madeleine Albright’s, former US ambassador to the United Nations and secretary of state, response to a question about reports that half a million children had died thanks to US sanctions on Iraq: “We think the price is worth it”.

Am somehow not a fan of Che, but if I have to choose between him and Madeleine, am going with Che, but very, very reluctantly.

If Che had been born around 1990 he would of course just be uploading vlogs to his YouTube channel. Without ads, of course.