It’s not the best movie in terms of story-telling, but as an addition to the ever growing number of Civil War movies it’s an excellent one and a very necessary one.

It doesn’t have much gut emotional appeal, story-wise, due to the fact that we don’t get time to really become fond of the characters in the movie. It has some very memorable scenes though, such as the time the main character lines up armed little girls to scare of a greedy foraging party or the wounding of the boy soldier at the beginning of the movie.

The story may grab you less than, let’s say, Dances With Wolves or Braveheart or Platoon, but the acting is good, and so is the historical context.

It has a deeply fascinating main character, solidly portrayed by Matthew McCounaughey.

The movie shows the effects of the infamous ’20 slave law’ in the Confederacy. If a Confederate soldier owned 20 slaves he could pack his bags and head home, and leave his poorer neighbours to do all the fighting for him. On top of that Southern civilians were visited by requisitioning officers who combed their small farms for everything that could be of service to the army. Especially poorer families were hard hit. At the same time the Southern planter elite refused to grow more foodstuffs to alleviate the hunger pangs of poorer whites. They preferred to grow cotton for profit, even in the midst of a war that was becoming a huge strain of the wannabe Confederate nation. This aspect isn’t fully shown in the movie, but it’s bad enough slaveowners who had 20 blacks back home could leave the front. In combination with the growing despair on the homefront, mainly among poor white women, and crushing defeats at the front, more and more soldiers deserted and went home. The movie does not overgeneralize and also depicts a soldier at the front who is fighting for his ‘honor’. Civil War soldiers had many different reasons for joining the fight. Some indeed, did so for their ‘honor’, though matters such as the 20 slave law opened the eyes of many Southern whites as to the true nature of the conflict. By 1864 about two thirds of the Confederate army would be AWOL, as in, no longer fighting. 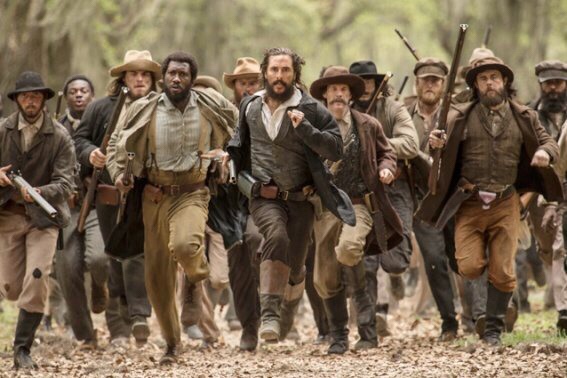 In some cases they become openly hostile to the Confederate authorities. The movie is centered around the figure of Newton Knight, a man who became openly rebellious and managed to wrest quite a big chunk of territory from Confederate control, especially given the limited means at his disposal. The territory became known as the ‘kingdom of Jones’ or ‘the free state of Jones’.

The ‘crime’ of an octoroon

The movie also shows the virulent racism in the deep South during and after the war. Most telling are flashforwards to a descendant of Newton Knight, who is one eight black and faces trial. His crime? He has married a white woman. His one eight of ‘black’ blood is enough to be considered a negroe. This and the fate of a black political organizer are some of the more painful scenes. After centuries of racial violence one would be unrealistic to hope it would just blow over now. Generations of violence can’t be undone with the stroke of a pen. It will take several generations and the acts of brave men and women to say no to racism.Movies like these can inspire us by drawing our attention to people such as Newton Knight, who went entirely against the tide of the times they lived in, by standing up against oppressive forces and by ignoring shallow and degrading social conventions. In the movie we see him save a child from a new form of slavery after slavery has ended. He also treats black members of his band as equals, and he goes and lives together with a black woman with whom he has several children. He had children with his white wife as well, whom he never divorced, and both families seem to have lived in harmony, not far from each other.

The character development in the movie stays rather on the surface, but this is one of the first Civil War movies to clearly depict deep class divisions in the Confederacy and the first one to hint at the fact that these class divisions have a lot to do with the eventual defeat of the Confederate States of America.On top of all this the movie shows how slavery was reinstated after the war, in anything but name. The conclusion can be that the Confederacy lost the war, but won the peace. It did not win its independency, but it managed, for more than a century after the end of slavery, to deny black people the same rights as white people. After a brief period in which free blacks gained significant political power, they were prevented in many different ways from enjoying their new liberties.The movie was a box office bomb, making about 21 milion dollars, against a 50 milion production budget (see: http://www.boxofficemojo.com/mov…). The characters are simply not developped enough and therefore lack the necessary emotional appeal to turn the movie into a hit, but it’s certainly an excellent movie to show and analyze in a history class.PS It has very realistic battle scenes, which, in the context of a drama movie, dissapoint in comparison to battle scenes in Civil War movies such as Cold Mountain or Glory.