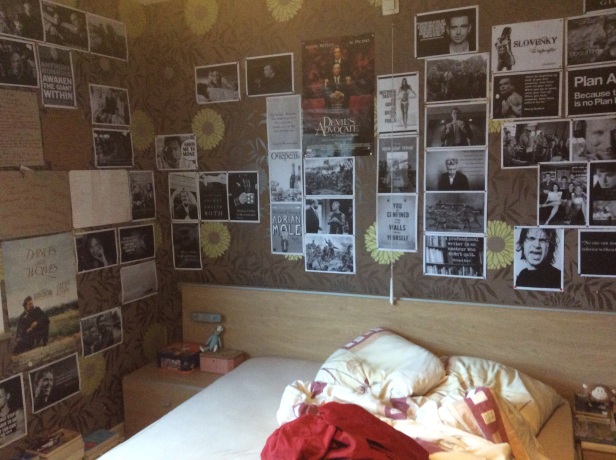 If you start a project out of neediness it won’t have a positive impact.

If you approach a woman out of neediness, she will reject you.

If you start a project out of love, without prioritizing monetary gain, it will generate a positive impact.

The best ideas are the ones that you weren’t actively looking for.

Obsessing about something is never the answer.

Most people are so hooked on external validation that they will not want to be a member of a club that accepts them as a member. (Paraphrasing one of the Marx brothers here).

Selling your time for money at a soulless place like IBM is the most miserable, degrading existence I have experienced. I would prefer working in a chocolate factory and scooping 1800 kgs of cacoa per shift ANY DAY.

You have to feel good about yourself BEFORE you launch a project, look for a job, look for what to do. If you feel bad, you will make bad decisions.

You cannot be happy without running and lifting weights, and it’s cheaper than therapy.

You can’t be your own therapist, but only 3 percent of therapists are exceptionally good, the rest SUCK, big time, no matter how many credentials (tokens of insecurity) they wave in your face.

Only 3 percent of people is truly committed to being all they can be. The rest is just indulging and floating from one little pleasure to the next temporary escape.

The people that annoy us the most reflect something that we hate in ourselves. And how I was annoyed by someone this year… What a dreaded mirror this person unwittingly put in front of me. I met a fellow sufferer of ‘not being enough itis’.

Women are attracted to men who are happy, are genuinely curious about them, make them feel unique, are living their truth, and are courageous about showing what they stand for and what they want from in a woman. Add persistence and you have yourself an attractive male.

There are no substances, legal or illegal, that will make me a better writer.

Except love and post coital chemistry maybe. And runner’s high.

I still manage to live a life that is very far removed from how I want to organize my life.

You seem to have reached the end of sexual experimentation, at least in terms of what’s possible between two people.

The thing you obsess about in fear will happen.

If you think you want to be a pick up artist, then what you really want is to be able to fully accept yourself and see that state of being reflected in the way women react to you.

There are people who live as true Christians, which is truly amazing to witness, but you can’t do that and you don’t want to either, mainly because your ego is too needy and you feel sex is sacred and not something that should be boxed in.

Video games are destroying our manhood.

There’s such a thing as emotional currency. Whatever I have given away in a loving spirit without expecting anything back has somehow floated back to me in abundance.

I have developed a very spiteful, hateful relationship with my native country, mostly with the Flemish part, and have so totally boycotted my native country and language that I have come to think in English and Slovak 24/7, I haven’t read one Dutch or Flemish book in 2016 and haven’t even read any articles in Dutch. This because I’ve had the feeling, ever since I was a child, that there was no place there for me. During my halcyon student days I briefly thought there was, but there isn’t. It’s possible to be rejected by an entire culture.

I will not commit suicide – fuck you those who would love to see that – for the simple fact that the only method I trust is to hold several grenades under my chin. And even then I’d be afraid that somehow I might survive and be a burden on others. Note to self: my biggest fear is becoming a burden on others. I might consider the method my father used, but then I do want to go out with a bang, you see.

Whatever doesn’t kill you may indeed make you stronger, but it won’t make you hurt less.

No pain, no gain.

The first step to deal with pain is to accept it and let it hit you.

I would have 50 percent less emotional if I were capable of playing an instrument, but I don’t have that talent (and/or patience).

I’m a natural born therapist, but without the right credentials (so far).

I’m still blown away by beautiful women with a wicked spark, but I’ve gotten much more specific.

If I don’t get attention, I don’t exist and feel splintered inside. But then I do feel whole when I’m absorbing someone else’s pain.

I’m very conscious of what an excellent spunge I am for other people’s pain. I have absolutely no problem taking away other people’s misery. It washes through me like water through an ocean bound stream.

You can never have enough wild nights in which you disolve in an other person.

Auftragstaktik is the best tactic if the people involved are well trained and encouraged to take initiative.

You can’t teach anybody anything if you don’t love them.

The following people have given me tons of insight in 2016, a lot of it as painful as flailing and as necessary as sunlight: Manuel, Abram, OZ, the book called The Happiness Hypothesis, What women want and how to give it to them, the following womanisers: Sasha Daygame (see picture), James Marshall and Liam McRae.

Money is energy. If you’re selling your time, the amount you are getting is fair, no matter how pitifully little you are getting. Your income usually matches your impact times your selfesteem.

It’s possible for a person to know you so well you can’t hide anything from them.

In the West family relations are being blown up.

Alcoholism moves at a slightly slower pace in the West.

My friends in the East love to spend the holidays with their families.

My ‘friends’ in the West almost invariably see family time as a burden and prefer to go with drinking buddies.

Sex and creativity are linked. Great sex unleashes your creativity, opens you up to the world.

We are surrounded by sexual imagery everywhere we go, we have gone through a so called sexual revolution, but most people I know have very little sex and very few sexual partners. Why don’t people have more of what they so clearly crave and need? The sexual revolution has made sex omnipresent, except where it belongs, in the bedroom.

People want to be loved and can’t handle it when someone appears that loves them.

People want someone to get close to them and when someone tries, they run, at least initially.

I wish I was like you, easily entertained. (Kurt Cobain)

Thank you for the tragedy. I need it for my art. (Kurt Cobain)

I do not understand the concept of exclusive love, since I never run out of love. Perhaps because I felt so deeply cherised and loved as a child.

If you try to limit me I build up spiteful energy that eventually erupts, like trying to dam in a river that can’t be dammed in.

It’s fairly easy to move to an other country and more people should do it.

You help people the most by simply accepting them the way they are, unconditionally.

One person managed to make me feel like a boring, walking sterotype and in return I found myself drawn to that person.

My grandfather passed away. It was easy to find peace with this, because he had spent his potential and lived his life the way he wanted to. What makes the death of my father unprocessable is that there was so much unfinished business and so much lost potential and passion.

There’s an entrepreneural mania going on because the west doesn’t produce much anymore, there aren’t any interesting jobs and so people become so called entrepreneurs. Most of them are selling motivation to other would be entrepreneurs. Who are going to do what? Start yet an other YouTube channel about motivation????

Between 1000 and 500 people have added me on Facebook and we have never interacted. Not one word. I suspect most have invited me to like their page. Quite a few have unfriended me when I didn’t like their page.

I sometimes think the future will be: everyone talking to their camera and uploading YouTube videos and nobody watching anything except their own ‘content’.

What has baffled me most this year (except my craving for real connection) is that some people make millions playing a videogame on YouTube. I mean, really???

One strong armoured division, plus two infantry divisions with air support can conquer western Europe (not the UK) because our men aren’t men anymore, we’ve been wimpified and zombified. And we are valueless, except that we want to enjoy and not take anything seriously, except our next travel destination. No wonder a couple fanatics can rock us to our very core with some needle pricks.

You can always trust your gut the first moment you meet someone.